Why We Never Tell: Part 1 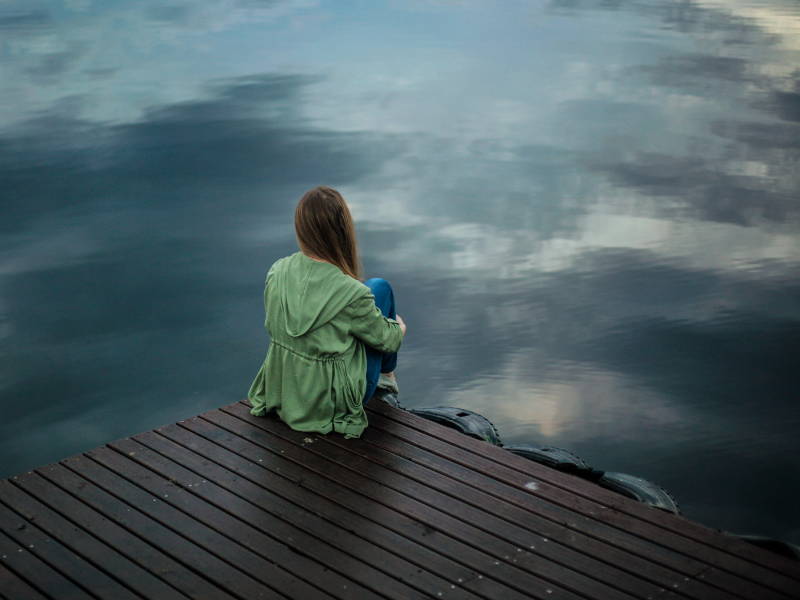 When I think about my childhood, most of my life flashes before my eyes like a flip book of polaroids: my great grandmother washing my hair when I was six, climbing a tree in the park, and lining up VHS tapes like dominoes so I could knock them over. The good memories I have are captured in these short bursts because they never lasted long enough to be a full-on DVD. They were not the majority of my life, they were the “in-betweens” of a much darker story. The majority of my childhood was consumed by abuse.

In order to survive, I did something that is common for many children who are in my situation- I repressed the memories that were unbearable. I dissociated from the trauma that consumed my life, and it left me with a sort of amnesia. I don’t remember much of the bad, and much of what I can recall is parsed together from what I was told again later in life.


What I do remember is a distinct loss of innocence at far too young an age. When I was only six years old, my grandfather began sexually abusing me. He told me that we were playing a game. He told me I couldn’t tell anyone about it. At first, I didn’t understand what was going on. I didn’t understand why I couldn’t talk about the things my grandfather did to me. As I grew older though, something started to feel wrong. I felt dirty and used- and I had to keep it all to myself.

That was the theme in our family. What happened at home, stayed at home. I watched my mother’s head get slammed into a fan by an abusive boyfriend. I watched her fight back, trying to avoid the blows she was dealt- and once it was over, nothing more was said. Other women in my family were also abused and they remained silent. My brother, who had witnessed my mother’s abuse and mine, never said a word.

I never used to question the veil of silence around what happened behind our closed doors, because I didn’t know anything different. I didn’t have any example of someone speaking out. It wasn’t until I was in fourth grade that I realized there was an alternative way of handling how the women in my family were treated.

For some of the kids in my class, the Drug Abuse Resistance Education (D.A.R.E) program was just another way to get out of the classroom. It was another assembly; another program that you went through the motions with, because at least you didn’t have to listen to a teacher tell you how fractional division worked or memorize every state in the U.S. For me, D.A.R.E. was much more than this. Not only did I learn about drugs, alcohol, and gang violence- I learned the importance of speaking up. When the D.A.R.E officer told me that if I was being hurt that I should tell someone, it stuck. I remembered the lesson.

I’m not sure when or how I did it, but thanks to D.A.R.E, I broke the silence around the abuse that was going on in my family. For the first time, I felt empowered to tell someone what was happening to me and the women in my family. The police put an end to the abuse- they saved me and helped me escape the indescribable trauma that was occurring in my everyday life- but unfortunately, they couldn’t save me from my family’s reaction to the action I took. 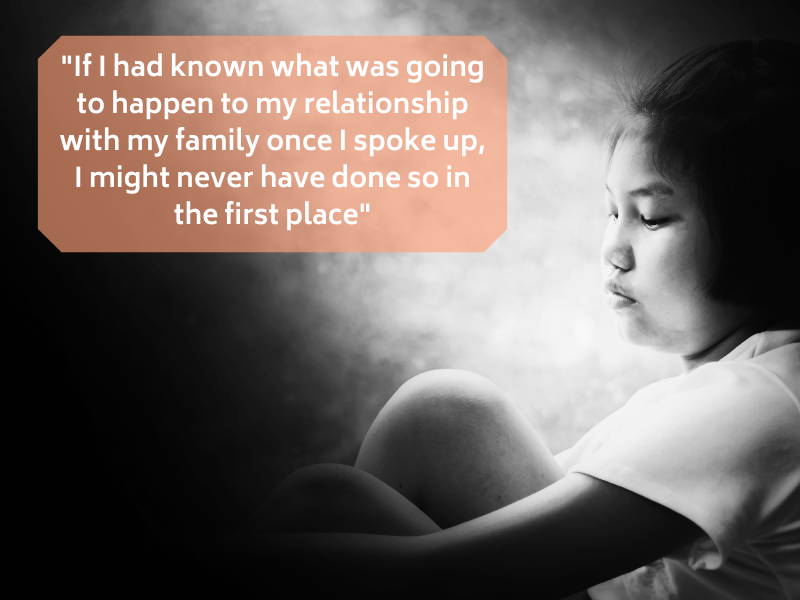 My Relationship With My Family...

If I had known what was going to happen to my relationship with my family once I spoke up, I might never have done so in the first place. I had broken the one rule my family had by speaking up. I was threatened, yelled at, and abandoned by my own family. I felt like I had no one. I was embarrassed, ashamed, confused. The stress eventually had a physical response. I developed shingles and got cold sores. I had been told that speaking up was the right thing to do and that things would get better, but all that was happening was that I was being punished. Where had I gone wrong? Why did I think it was a good idea to speak up?

The fear of reporting abuse is rooted in a fear that life without abuse will be worse than life with abuse. A lot of people seem to struggle to understand the consequences that speaking up about abuse has on those enduring it. When victims are being abused, they are groomed to believe that telling or reporting the behavior will be worse than behavior itself- and for a while, it might even feel like that is true. I continue to be haunted by the effect that reporting my abuse had on my relationship with my family. I struggle to encourage others to speak up when I know what they could face afterward. Reporting is only the first step in a long journey of recovering from abuse. The healing process starts with reporting. It doesn’t end there.


As someone who has come out the other side, here is what I can say with confidence: Abusers are telling lies. You are worthy, you are special, and you will find people who value you as a person after reporting. Start healing and start telling your story. The people who matter will stay.