FIRST TIME? ENTER YOUR EMAIL TO RECEIVE 10% OFF

An Item Was Added To Cart!
X

"These are great for women with those squat booties!!! They are short, but they never show any of your bottom and stay in place while working out!"

"I love these shorts!!! I haven't worn shorts to a gym in YEARS. I was encouraged to buy a pair and I love them!! I've gotten so many compliments on them!"

"This is my second pair and I love the fit. No muffin top. No camel toe. Fabric is soft and comfortable. I may not be perfect but I shorties are right on and darn cute! "

In Case You Forgot Muscle Crop

In Case You Forgot Muscle Crop

Hop on the encouragement wagon with this muscle crop!

Please allow 3-5 days for your domestic order to arrive. We try to ship within one day out of our Verona, Wisconsin warehouse. Yay! The midwest...so convenient.

Pre-order goodies ship out by the listed date.

Returns and Exchanges are easy, simply make request for a return or exchange, receive your return label, and send your item to our returns center for fast processing. We'll get you a replacement or refund in a snap!

I absolutely love WOD bottoms muscle crop tops. The message on this particular top is important for everyone to hear/read. I love the positivity and empowerment.

Thank you so much for the kind words!! We LOVE that you LOVE the fit and feel of our goodies. ❤️
M
M.
lll:
Don't judge a book by its cover

Originally I thought this shirt was going to be a no go for me because of the style, but for $9 I gave it a try. Before trying It on I was convinced it was going to be way too short. BUT after I put it on I heard angels sing. It isn't too short , it is super soft and the message is so awesome that it has moved up the ranks in my workout arsenal. If you are on the fence about it DON'T be, buy it because you will LOVE it ❤️ it is a badass shirt 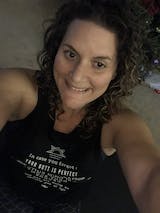 Thank you so much for the phenomenal review and photo! We are so thrilled to hear you love the punderful prints and fabulous fit of your WodBottom goodies! A thing of booty is a joy forever- and that’s what we want for you! :)
B
B.
lll:
Great crop!

Love the way this fits. Didn’t run into the usual issue of the crop being too billowy. Absolutely recommend!!

Yay!! We are so happy to hear you love the fit, feel, and fun design of your WodBottom goodies! We can’t wait to see what your next BOOTYFULL choice will be! ❤️

Back to the top swatch-element